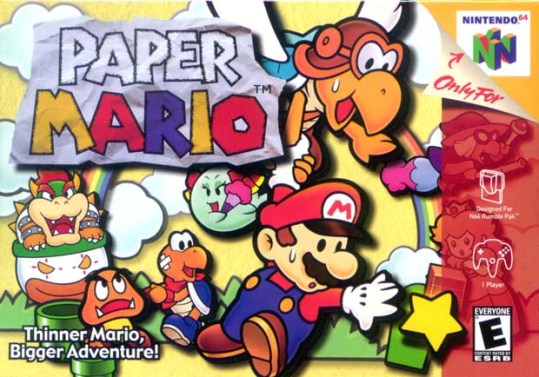 Nintendo isn’t the only company in town, but when they make something like Paper Mario, it feels like they are. I don’t know what corporate culture, or historical success, or drinking water is responsible for this kind of rare magic, but I’m glad that it’s permeated the brilliant minds and eyes and hands of the employees. Paper Mario is a weird, wacky idea but quintessential Nintendo.

It’s one of the few N64 games whose looks haven’t aged like milk. The two dimensional, cardboard look was a style at the time that was in contrast to most games at the time, which attempted a realistic look in a 3-dimensional space. You can hardly blame the other developers for trying that out, but unearthing a time capsule 20 years later shows which was the correct choice at the time. Paper Mario still looks charming, with basic animations, a bright color palette, beautiful lighting effects and it all looks like a Mario game.

It’s also not actually entirely 2D. All the sprites/characters are flat, along with the battle screen, but the towns and world locations are in three dimensions. You’d think this mix would be confusing, but it’s not at all. Since the game relies on a simple, clear visual language, I was never confused about where to go, or if this part of the screen was part of the background, or something I could actually go to or interact with.

The simplicity is carried onto the gameplay, which leans towards traditional role playing mechanics including experience points, hit points, separate battle screens and, thankfully, timed hits. Continuing the tradition set by Super Mario RPG, Paper Mario will allow you to do more damage to your attacks and reduce incoming damage by timing button presses accordingly at the right moment. This results in an active, engaging battle system that negates a button mashing strategy and keeps you hooked with each move.

Another factor I appreciated is the the numbers in combat are kept low throughout the game. When numbers start to drift into the thousands, or tens of thousands in other RPGs, they start to lose some impact. There’s no meaningful difference between 5,714  damage and 5,715 damage, is there? But in Paper Mario, an attack that does 3 damage instead of 2 because you pressed ‘A’ at the EXACT right moment is incredibly satisfying and could make the difference between a win and a loss. Even though the number is “lower”, it means more. Each increase in power or skill is tangible and significant – it’s one of the few games where I was using basic skills near the end of the journey. Almost no move becomes obsolete, and in RPGs that is a miracle.

The mix of this cel-shaded style, platforming, light-hearted writing and fighting is pure, optimistic joy. I unfortunately played the superior Paper Mario: Thousand Year Door first, then went back to Paper Mario, which is the wrong way to do it. It’s difficult to go back in terms of years of benchmarks, visuals, hardware and quality of life updates, but that didn’t mean there wasn’t a lot to appreciate. Sales were very good, justifying many sequels and spin-offs series that has seen more misses than hits, but I’m thrilled Nintendo went out on a limb and showed, once again, that the minds of Nintendo and the heart of Mario can make anything happen.

I wish I could say more, because Paper Mario deserves it. It’s one of those rare instances where I played a game well past release and still liked it more than the newer games I was playing at the time. But, as with many entries, it’s quality over quantity and this is where you’ll find the exit for Paper Mario.