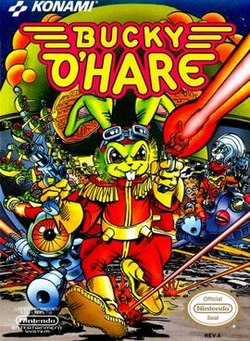 I’ve already mentioned how the 1990s had some incredible rivalries, but there’s another pop culture phenomenon that it unequivocally dominated: introductions to animated cartoon shows.

It’s an embarrassment of riches. One minute you’re sitting there, bored out of your mind waiting for some commercial to finish up when BOOM.

Anthropomorphic anythings are automatically cooler than anything to a seven year old.
Put them in space, fighting evil mutants, aliens and toads (beware) and it became my temporary religion. The show only lasted thirteen episodes, but that was all Konami needed to create their Mega Man. A more family friend version of Contra. And they had it in Bucky O’Hare.

It’s not a classic, but it’s certainly an underplayed, underrated NES gem. It’s colorful, it’s challenging, it’s deep, it’s difficult, it has multiple characters with different abilities, it’s got boss fights, level selections, power-ups and one HELL of a challenge curve. Everything I want in an old school, side scrolling adventure is right here.

Of course, since I was playing it when I was so young, I had no idea what the hell I was doing. The planet selection screen does give you some freedom, but I didn’t know which planet to start with. By default, I always went with the Green Planet first, since it was the only one I could beat without dying too much. It’s a nice little design choice to have the smallest planet the easiest. It also appears in the top lift, subliminally nudging gamers to go there first. It’s like Konami used to know what they were doing.

As I sat in the sunroom on Oliver St. in the dead head of summer, I can still remember sweating like crazy as I played this well into my morning chores. The controls are perfect, but the difficulty will push you to the limits. Every kind of disaster awaits you. Shooting enemies will be the least of your concerns; disappearing blocks (again, Konami Mega Man), lava coming from the ground, instant death pits, blocks that move in one direction, asteroid parties, crushing ceilings, elevators full of enemies and rolling rocks of doom are just a handful of the hazards you’ll encounter.

Some NES games would slow the action down when there’s a ton of information on the screen. With Bucky O’Hare it’s almost as if it speeds up. Your movement, jumping and firing is all done at one speed – fast, and this goes for everything else. You barely have time to take a breath, and you will die a lot. Or at least, I did. Abusing Blinky’s flying ability, or Bucky’s high jump is a necessity. Willy, Deadeye and Jenny the psychic cat did NOT see a lot of action during the platforming sections and I recall being at the mercy of a game that forced trial and error upon you. If I didn’t love the catchy music, if I didn’t find the cast endearing, if I didn’t find the levels satisfying to clear, there’s no way I would’ve kept going.

Bosses were terrific and each death led me to switch up my choice of character, thinking I could do it if I only just switched up my tactics. Bucky O’Hare flirts with greatness this way; it’s hard enough to piss you off, but never enough to make you want to quit.

I can’t accurately tell you how close the game is to the TV show. I don’t remember a single episode, or even specific aspects of the show’s canon. The intro is obviously unforgettable, as is the game. That space bunny with attitude lured me in with it’s box art and never let go. I doubt I could outperform young me if I picked this up today, but I really wouldn’t mind trying.