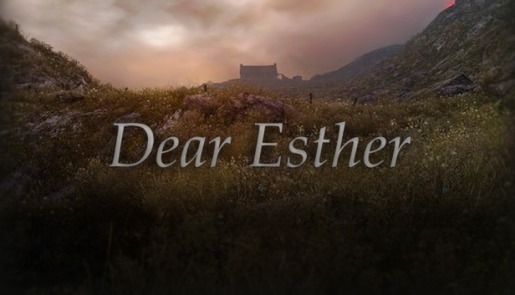 Like other art forms, video games are in a constant state of evolution. It’s not quite like natural selection; bad games still get made, and some fantastic ones fail to sell. The resulting closure of developers who take risks isn’t fair or deserving, but I’m beginning to think those two words are as much a fairy tale as Snow White. I’m not jaded, I’ve just accepted the fact that not everything great lasts and some crap tends to endure well past its expiration point.

But then something like Dear Esther comes along, which I don’t necessarily enjoy but I look upon with admiration. It’s not bad, but it’s not fantastic. An evolutionary sidestep? It’s somewhere between dull and slightly captivating. It’s a bronze medal example of video games maturing and developing from a childish pastime to a more quiet, adult piece of interactivity. Some deem it as a “Walking Simulator.” I believe this meant to demean or outright dismiss this category of games, but I don’t know. Isn’t it nice to go on a walk for a few hours?

If games are to branch out, try new things and fail along the way to spectacularity, then we must have risks like Dear Esther. With a heavy focus on narrative and minimal gameplay, you set out on a Hebridean (northwest Scotland) island, listening to a dude read a series of letters to a woman named Esther. You walk around, triggering new memories based on various locations. Your flashlight will turn on automatically now and again. You’ll hear lamentations, joy, nostalgia, wit, pain and love through the fitting voice acting. But what else?

To say “that’s about it” wouldn’t cover it all, but I’m afraid I can’t clickbait you into thinking there’s more you can do. Maybe “Walking Simulator” IS the best description, but I appreciated how beautiful the landscapes were. I was a little creeped out at times. I was intrigued to learn about the island’s history. Donnelly, Paul, Jakobson and Esther are ghosts. You don’t ever see them (you don’t ever really see anybody), but a growing curiosity of who they really were stuck with me until well after the credits.

There’s something about being alone; true isolation. Even in your apartment, or suite, or condo, or house, or bridge, there’s always somebody nearby, isn’t there? How far can you start walking until you hear, or see somebody else and you’re reminded that we all have roommates in some capacity. I felt tranquil in Dear Esther. The risk of going somewhere solo, the reward of dictating your own pace at all times is there.  The wind would blow and I would picture myself on my own trip to Scotland with Kyla, and remember how incredible it felt to have all the Scottish views to ourselves for a few moments.

Being alone with your thoughts can be a meditative process and I’m sure that’s what Dear Esther was going for. The ending is left open to interpretation. My interpretation – it doesn’t make any sense, I’ll have to look it up online to see what it meant, and it was breathtaking. The view of the moon shining on the tiny dock and water while you…well, I won’t spoil that here. Needless to say, if you told Esther what happened, she’d likely throw your letter in the recycling.