Well, that’s quite a coincidence! I was just about to do a review of my experiences with Fallout 4.

Sure is. Listen though, I think I’d just prefer to do this on my own. I don’t feel like answering any surveys, thanks.

Ahhh actually, you’re right. My apologies. Did you want to come inside?

Well..the truth is, I enjoyed my time with Fallout 4, but I definitely felt it was the weakest in the series. In fact, I felt the engine was getting a little dated, the main quest wasn’t enticing, the game’s dungeons all felt too similar and the infamous Bethesda bugs kept popping up and disrupting my experience. 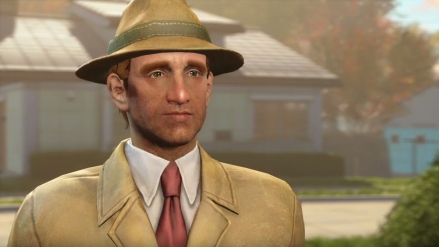 Don’t get me wrong. The scope of Fallout 4, like all of Bethesda’s giant open world Role Playing Games, is absolutely stunning. The sheer freedom I felt when creating my character and choosing which direction to go in is thrilling. Intimidating, even!

There’s just so much to do, isn’t there? Not only does the game smartly allow you to build your character’s fighting style in any way, but you can murder virtually every NPC, declare war on any faction you wish, ally with all sorts of unscrupulous entities, all while travelling the intricately detailed nuclear holocausted world. You can really feel the struggle to scrap some semblance of a life together in a world where bottlecaps are currency, half the population have turned into ghouls and where all sorts of secrets lie protected by horribly mutated monsters and armies of bandits. It’s quite an adventure!

How do you know my name?

Ok, ok. Never mind. Was there anything else?

Eh, not really. Defending an abandoned castle against a large synth army felt like something right out of Terminator, so that was pretty cool. But I still find most of the quests to be a little loose. If I somehow drop an important quest item, the game doesn’t  warn me. If I accidentally shoot somebody in a town, then I’m labelled an evil doer forever. It required a lot of quicksaves and quick loads, which I didn’t really mind doing, but I felt that I had to trick the game into succeeding. I definitely cheated a few times in areas where I didn’t feel like I’d built my character strongly, or properly enough. I will grand you the perks system are amazing, with a vast selection of upgrades available. I can see people playing through Fallout 4 many times. It has nearly limitless lasting appeal, provided the initial appeal is there to begin with.

I loved it. I’m always into city building and I always felt that collecting tons of useless crap in other Fallout games could be better served than just selling them off to the nearest merchant. I appreciated that you could construct buildings and make beds for your townsfolk. Defending the limits with turrets, and creating electric generators led to a lot of potential creativity. Now, I didn’t really expand upon that potential, but it’s there. Points to Bethesda for this.

You know, there’s a lot more to talk about. There was this weird bug where my power suit would somehow end up on my roof each morning, and I got really tired of all the loading screens and I REALLY wish that Nick Valentine, the synthetic Private Detective, was the main focus of the game instead of some blank slate I made to go find my son and….

Oh, I don’t think I’ll go back to Fallout 4. It was an amazing, but mildly frustrating experience and it will take quite a lot for me to get back to another Fallout game anytime soon. I’m burnt out, but still feel that it deserves a strong #397 spot on the 500. Did I mention that I thought it looked incredible, and appreciated the better use of colour in Fallout 4 than the previous titles?