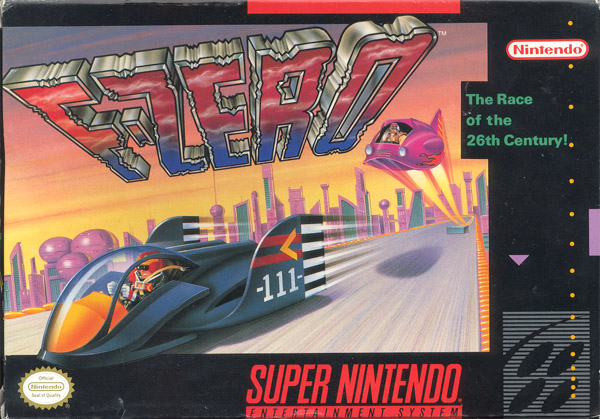 It is astonishing how many franchises Nintendo created out of thin air. It’s even more incredible when you think about how many are still relevant today. You’ve obviously got the Marios and Zeldas, but even the less popular series still manage to retain a dedicated audience through high quality titles. We’ll get to Metroid soon enough, but for now, let’s discuss F-Zero.

Sadly, the legacy is limited. There really have only been three main titles: F-Zero, F-Zero X and F-Zero GX. While lacking in quantity, the F-Zero universe more than makes up for it in quality. It tapped into the lucrative racing genre, but placed it far into the future and gave it an incredible sense of speed. It didn’t feel like a traditional Nintendo game, that’s for certain. Each one received rave reviews, but that’s of secondary importance compared to the genre defining pioneer title F-Zero. It was the first racing game on the Super Nintendo and still one of the best. It was the start of something very unique.

I can’t even draw parallels to other racing games on the SNES, like Super Mario Kart. They’re too different, despite sharing a genre. F-Zero‘s challenge is exponentially higher, particularly on the expert difficulty. There’s bumpers on the sides of the tracks that drain your shields, enemy racers are relentlessly aggressive and the signature speed can be intimidating to the say least.

Forks in the road force you to make split second decisions. Recharge areas on the harder tracks are fewer and far between, and you’ll have to alter your tactics on the track; is it worth going into first if it means not getting all your power regenerated? Choices like these added to the depth and the quality exceeded beyond the futuristic presentation.

It’s amazing how impressive the faux three dimensional affect is here, dubbed “Mode 7”. You’d see this style of graphics in many Super Nintendo games, like Axelay, Final Fantasy 6 and Secret of Mana to name a few. But all those came years after F-Zero, and I can’t help but retroactively admire the effort here. You really do feel like you’re racing in 3D at tremendous pace.

F-Zero still controls brilliantly well, praise the racing gods, because if the cornering, acceleration, braking  and hovering were anything less than perfect, F-Zero would be impossible. Hairpin turns, risky shortcuts and infrequent straightaways keep you on your toes at all times. I always loved the dramatic 180 degree camera turn to show the smoldering pile of rubble that used to be your vehicle upon failure.

The highlight for me is the soundtrack, and I’m not alone. “Big Blue” and “Mute City” are mainstays in the series and frequently remixed online by musical enthusiasts. They’re featured in nearly every Super Smash title for good reason; the melodies are unforgettable and it’s impossible to not feel hyped up the second they start.

There isn’t multiplayer, but that would change in subsequent titles. The series would evolve far beyond what F-Zero can produce, but it’s still another stellar example of how the Super Nintendo created lasting franchises based on great control, sound and graphics.