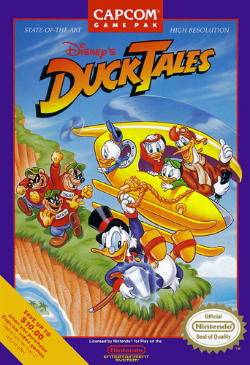 It’s downright foolish to discuss DuckTales without talking about “the song”. I don’t mean the theme to the TV show, although that does lay claim as the catchiest ever. I’m going to have to focus mightily if I want to get through this.

As I was saying.

The Moon theme is largely responsible for keeping DuckTales in our pop culture zeitgiest. It’s one of the best you’ll find on the NES, with an incredible build and unforgettably encouraging melody. Much like Snowboard Kids, DuckTales wouldn’t fare nearly as well without its signature track. Even though The Moon stage is one of my least favorite, it’s impossible not to fire this up and smile along as the cosmic audio welcomes you back to a time when Capcom could do no wrong. They were a natural partner with Disney and their arsenal of morning cartoons. You’d see more than a few examples of classic, 2-dimensional platforming from this duo on the NES: Chip ‘n Dale Rescue Rangers, TaleSpin and Darkwing Duck to name a few. And while the experiences had were short and fleeting, they all tapped into what Capcom and Disney so successful back in the late 1980’s/1990’s.

Saturday morning cartoons were far more religiously satisfying to me than church on Sunday and a continuation of a week long obsession with animation. Not only did you have the Disney afternoon directly after school, but also Saturday morning when you knew school was too far in the future to worry about and the remote control was right there. Cereal and pajamas, naturally, were mandatory.

DuckTales was one of the best. Scrooge McDuck’s 1% problems of being the richest person on the planet doesn’t exactly resonate with modern issues, but the motivation is unique. Alan Young’s voice is one of the most iconic of our generation, and instantly recognizable among thousands of characters that visited us in our youth. Scrooge is the perfect candidate for his own game.

The goal of the game isn’t to save the world, or rescue a princess – it’s simply to gain more wealth. Good old fashioned treasure hunting isn’t beneath Scrooge, who has never been afraid to get his hands dirty. You’ll travel to Transylvania, the Amazon and other places around the globe (and above it) fighting bosses and trying to score as much loot as possible.

The cane is one of video game’s most versatile weapons. Scrooge can use it to jump higher, kill enemies from above, attack from the ground, whack stones into things and discover buried goodies. You’ll see this mechanic copied even today, as Shovel Knight’s down attack is a direct homage.

It’s short, but most NES platformers are. That doesn’t detract from a great experience, with three difficulty levels, the trademark theme song, all of McDuck’s friends and family and a slew of classic villains. I still think Magica De Spell and Flintheart Glomgold are delightful names to say out loud, don’t you?

It’s sort of surprising to see the cult following behind DuckTales. It was rarely mentioned as one of the better games in the NES library, but it has stood the test of time so well that they recently released DuckTales: Remastered. A full remake with 3D environments, improved audio and visuals and, to my utter delight, a return of the voice cast of the original show made this a surprise hit. Not every franchise gets this kind of luxurious treatment.

I’ve heard great things about the new show. The premise obviously still has legs, behind a no-nonsense, Scottish duck Uncle who could buy you everything but would rather go on an adventure and teach you things money can’t buy.