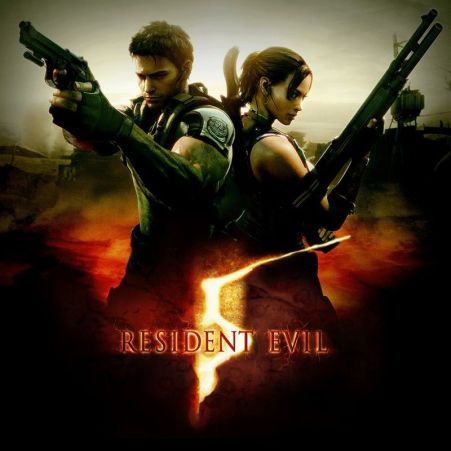 This one may raise a few eyebrows.

I’m not going to sit here and say Resident Evil 5 is a good game. Fans of the series generally label this one as one of the worst; the partner AI is boneheaded and ineffective, the graphics are muddy (you’ll see what I mean) and there’s more than a few moments that are outrageously over the top, even for a series about a zombie apocalypse and evil corporations.

So why did I enjoy it more than 205 other games?

That’s your answer to everything! You can’t just say playing through a game’s campaign with a friend is the be all, end all of game preference. That doesn’t make up for the shoddy game design or the potentially racist overtones of the fifth entry in a franchise that’s following the BEST in the series.

Sure I can. This blog is about my experiences, not a literary study of which game is better than which. Ranked lists of pop culture items are dumb by nature.

JP and I have the same sensitivities when it comes to scary video games. Our tolerances are just enough to push each other towards that creepy door, or cover for each other when an unknown monstrosity makes its presence known with a roar and a flash. It’s always more assuring when you have somebody next to you urging you on, or a second set of eyes on a puzzle. I’m generally super forgiving to others, but quite harsh on myself when I can’t figure something out, so it’s a psychologically cathartic reason why I love having a 2nd player along for the ride.

The Resident Evil games are so stupid. However, they’re the right kind of stupid.

What do I mean by that?

You can tell the people behind the project care about it, a lot. They know the horror genre very well and are obvious fans of George A. Romero, Alfred Hitchcock, John Carpenter and other titans of terror. You’ll see haunted houses, every type of decapitation and mutilation imaginable, all manners of body horror, zombies, infected hordes, deranged ghouls and everything in between. Nothing is off the table. It’s all played straight, aside from the odd cornball line but I would never say the games are an insult to previous iterations in the franchise, or horror movies in general.

Resident Evil 5 is Night of the Living Dead if it was directed by Michael Bay.

Fine by me! I wasn’t offended when I had to punch a giant boulder to defeat the end boss, or that we were constantly swarmed by ineffective, dumb zombies. The graphics were about as “realistic” as I could have hoped, and all the goo and gore satiated my moderate desire to be grossed out.

Button prompts to use fatal wrestling moves on the undead popped up frequently; punches that may stagger a normal person would send our enemies flying into their cohorts, accompanied by our screams of glee. My go-to was shooting them in the foot or knee and sprinting up to them in hopes of a roundhouse kick that would somehow incapacitate them and conserve ammo at the same time.

The only time we got truly spooked was the crocodile section. Admittedly, this was a well done area that fit right in with the rest of the series, instead of relying on impossible physical action.

You’re half submerged in water, and you see a form swimming towards you. This already makes my stomach sink; Jaws is an all time favorite, but recently swimming in open ocean renewed a fear I had forgotten. Not only are these beasts real, they exist in an environment where you can barely move. A nightmare come true.

This is why JP and I stick to video games.

So, giant crocs. One hit kills. If you don’t snipe them upon their approach, their bite result in an immediate game over. It was tense, it was thrilling. It required a slow approach and constant communication. More than once, we averted our gaze aside when we knew it was too late. No need to relive that swipe of teeth over, and over again.

I can’t justify it anymore than that. JP and I avoiding reptilian threats, shooting zombies and ninja-kicking the shit out of infected villagers. I’m not a hardcore fan of the franchise, at all, meaning I’m totally forgiving when a Resident Evil goes off the rails. Really though, how seriously can you take a franchise that includes the President of the United States turning into a zombie, and lines about a Jill Sandwich?