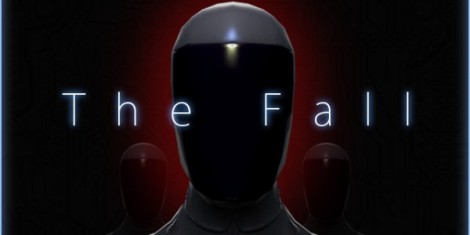 I always like when something can be described as a combination of two other things. This is tough to do when describing the personality of a real human person, but when it comes to video games, it’s a little easier. I find it a personal challenge to do so, oftentimes thinking if I can’t find an apt duo to describe the one, I didn’t grasp the game fully. Because everything can be categorized as 1+1 = 2, right?

The Fall‘s atmosphere is draping. It’s impossible not to be pulled in. Everything is covered in shadows, or a dim light, or darkness. Dust permeates the air. Everything looks like it’s been underground for centuries, whether it’s a rock or a makeshift cardboard house model. It reminded me greatly of Super Metroid in that it’s tonally consistent throughout and gave me the creeps. It also reminded me of late 80’s, early 90’s point and click adventure games. So…The Fall is Super Metroid meets The Secret of Monkey Island?

Not quite, but it’ll do for now. You play as an artificial intelligence dubbed “ARID”. You’re essentially the suit that is meant to protect the human on the inside. You’ve crash landed on a hostile planet and your fleshy inter-pilot is injured. It is your duty as the robot suit to protect him and find immediate medical assistance. Against the backdrop of an abandoned industrial facility swarming with other hostile AIs, this is a very cool setup. There’s a ton of cultural entries that deal with humans and AI, but rarely do I see a story told about AIs talking and reasoning with other AIs.

Since your memory has been wiped and you can’t properly tell what your mission parameters are, other AIs deem that you are faulty and must be eradicated. A lot of the story’s key points are dictated by logic that a robot would use. Since you put your human pilot’s life at risk (to get the medical attention he needs to survive), you have failed your primary goal. Never mind that the ends would (or might) justify the means. In their eyes, you’re the real threat.

I liked how the main villains were the Caretaker and the Administrator. Two titles that should denote empathy and cooperation, yet also a coldness and distance. Another of the key plot point revolves around the fact that you are not able to lie and in order to save your human, you must be able to do so.

I wouldn’t dream of discussing the final 20 minutes, but I’ll give you fair warning that it’s easily the best part of the game and totally in tune with a lot of great science fiction. Hard questions of obedience, slavery, morality and logic are brought up in an intriguing ending. Sadly, it is a bit of a cliffhanger since this was intended to be the first game in a trilogy and with no sequels in sight, The Fall‘s legacy remains with just the one (instead of 1+1+1). While the actual gameplay wasn’t much to blog home about, it truly was worth going through this short journey to relish the background threats in the misty dark and hear arguments between robots whose stark logic is truly terrifying.