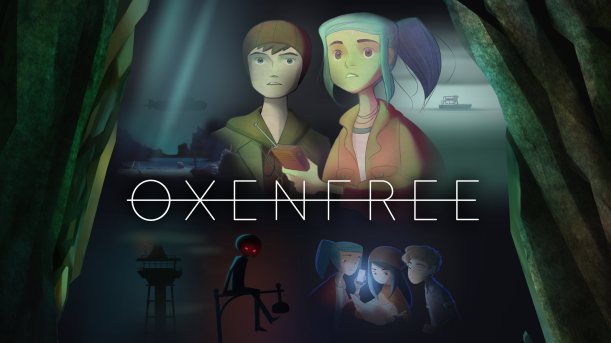 Oxenfree is the first game on the 500 to be featured on one of my Top 10 lists. What does this mean? Was 2016 a weak year, or am I starting to progress into a higher quality of game on the 500?

Both, I’d say. I can’t lie and say I’m not excited to nearly be done the first 200 entries. I’m not halfway yet, but to be within striking distance of that target is motivating. The year 2016 may not have been the strongest, but I’d be wrong if I said Oxenfree wasn’t a compelling experience.

As I’ve mentioned previously, I’m a wimp when it comes to horror – it’s too intense for me, my imagination runs wild and I scare easily. One of my favorite Youtube channels is the Kill Count. The host, James A. Janisse combs over popular scary movies cataloging the murders and going over plot details. It’s a godsend for a wimp like me; I love movies, but don’t love being scared. Check it out! Highly recommended.

But I also DO love being scared, it’s just a matter of degree.

My sweet spot is creepy. Movies like Annihilation, TV shows like Stranger Things, plays like Shining City and video games like Control really get my heart racing. You might be scoffing at these examples. They’re hardly scary – Fine, but they still instill a sense of the unknown, have good stretches of dread and try to blur the lines of reality with paranormal. I’m down with that, every day of the week. This is my safety zone and as long as I can tip-toe up to the line without crossing over, I won’t have nightmares.

Oxenfree is fantastically creepy. Even the title is good. Something about that word all by itself, without the “Olly Olly” in front makes it seem unnatural. The phrase itself is appropriate for the game’s setting; a bunch of kids take a boat to a haunted island for a weekend party. True to most coming of age tales (and horror movies!), everybody has some emotional baggage, or uncertainty they’re coping with. In what manner, and when it comes out, heightens the tension throughout the story. It’s an age old trick, but it kept me fascinated throughout.

Another highlight is the speech system. Selectable bubbles will pop up during a conversation, but there aren’t any unrealistic pauses after sentences prompting  you to choose your response. You can interrupt people, you can let them finish their thoughts, you can not speak at all and the other characters will continue conversing. Like in real life. It’s such a great dialogue system that I still wish other games had adopted, or adapted it. I didn’t have to wait for chatter to be over before exploring the island, the chatter was happening AS we were exploring. It resulted in interesting interactions and I was never bored, regardless of who my current companion was. 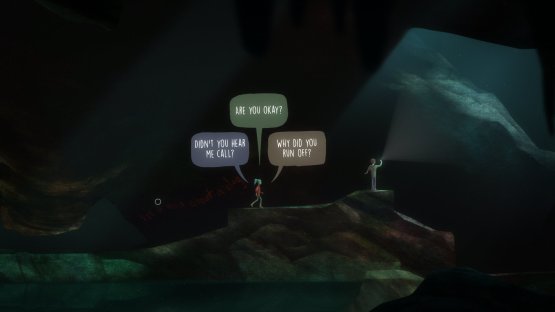 Through the choices in dialogue, you create your protagonist’s personality. True to my nature, I tried to be as goody-two-shoes as possible. MY Alex was kind and wanted to diffuse situations and keep everybody calm as much as possible, despite the disturbing events occurring around us.

I’ll never forget the main theme. I doubt you will either.

I was outright startled more than a few times. You’d think a zoomed out camera on stylish cartoon characters couldn’t provide any jump scares, but you’d be dead wrong. I cringed at the thought of bringing up the radio again to try and solve a mini-puzzle, or communicate with the ghostly apparitions that clearly want something. Vast, empty spaces began to feel claustrophobic, and venturing into simple houses inspired fear.

The sound design is stellar, taking advantage of every light turning on, every tweak of the radio signal and every voice you really don’t want to hear. I’ve heard that the real secret to scaring an audience is through sound, not visuals, so it makes sense why Night School Studio (how perfect is THAT name by the way?) focused attention here.

This is so bizarre, I swear Stranger Things came out long before this game too but no, once again, my brain keeps insisting the show has been out for a decade but it’s not even four years old yet. It didn’t start the trend of retro-escapism of 80’s pop culture, but it certainly heightened it. Oxenfree deserves some credit; everything I found and loved in the Goonies, Poltergeist, E.T., The Thing and Stand By Me I also found here. Ordinary youths going through extraordinary things. That trope will never get old, even if I will. I may be 36, but I still feel 16.

Great ending(s), too. The one I saw really tied together realistic themes of growing up, loss and how to rebuild yourself after a loss. It also includes timeloops and ghosts, but it’s a video game, so that works too. I felt nostalgic by the time the end credits rolled and displayed the pictures of the gang taken at various points in the story. That’s also a trope I hope never gets old – Celeste, Earthbound and Final Fantasy 15 used this mechanic in ways that showed a different visual perspective of the characters and really tightens the emotional bond. There’s no gameplay mechanic behind it, it’s just a nice touch that helps develop your bond with the characters.

I think Oxenfree would have found itself higher on the 500 with more realistic dialogue – the lines coming out of the teenager’s mouths sounded a bit older and more refined than from people just about to graduate high school. Additionally, backtracking when there isn’t a conversation going was pretty dull.

Regardless, this is an impressive debut by Night School. I’m keen to try Afterparty, largely because I’d trust any group of developers who manage this level of atmosphere and originality in a seemingly overdone story.