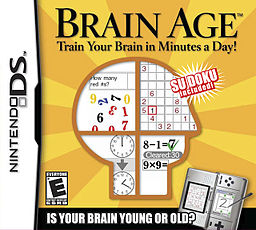 Quantity of time spent is not a criteria to being on the 500. Very few titles reach the pinnacle that are the time sinks Dota 2 or World of Warcraft. Some are immeasurable at this point; I couldn’t even begin to estimate how many matches of varying editions of Super Smash Brothers or Mario Karts I’ve completed.  A curious note solidifies this point, which is that none of my top five games are anywhere near my longest experiences.

Enter Brain Age: Train Your Brain in Minutes a Day. A present from a friend, something to throw in my bag on my flight back home after my penultimate year at Mount Allison. Nothing more. I thought I was aptly prepared for the 16 hour trip (door to door) from Sackville, New Brunswick to my parent’s home in Victoria, British Columbia. I was not. In case you’re unfamiliar with Canadian geography and need a reference, the two towns are about as far apart as you can get on the planet while still being in the same country.

A lot of thoughts cross your mind when travelling 5,927 kilometers, most of them resulting in being some kind of bored. There’s only so many video game magazines I could read, only so many pages of a behemoth fantasy novel I could follow before my eyes started to wander towards sleep. Of course, it was never quality (or quantity!) sleep.

After 12 hours, I’m starting to fade. Five airports, four takeoffs and landing procedures, re-checking my baggage, you know how it is. Eventually I didn’t want to do anything but stare out the window and question every life choice I made. They couldn’t have all been good, otherwise why did I en up in such a mediocre purgatory of bad food, adequate service and surrounded by a feat of magnificent engineering that I’d long taken for granted?

Thankfully, Brain Age saved me. I popped it into my DS, praying that it would absolve me from my invisible pain of impatience with life and it absolutely did. Beginning with math puzzles, reading out loud (which nobody else surprisingly seemed to mind) and finally finishing up with Sudoku, my brain was instantly energized. I have no idea where it came from; maybe I was at that special level of tired where one can be entertained by something as inane as an infomercial or instructions  for a pair of tweezers. Who knows.

All I do know is that thanks to Brain Age, I felt a surge of relief and, dare I say fun? It had been at least a decade since I thought math was fun, but the quirky presentation, the bite-sized gameplay pieces and an overall positive theme resulted in a sort of intellectual zen that only evaporated when the announcement reminded me that we were only 10 minutes away from touching down at YYJ and could we please shut down all electronics, put our seats back to their original position and resume wishing you’d brought a book crosswords or Sudoku that didn’t require electricity.

This was one of many games that rocket launched the DS as one of the most successful pieces of hardware ever. It had Mario and fantasy strategy games, sure, but it also had cooking games. Lawyer games. Chess. Graphic novels. And Brain Age, the little bookworm that could, reinvigorating a genre that fit in a hundred million pockets.