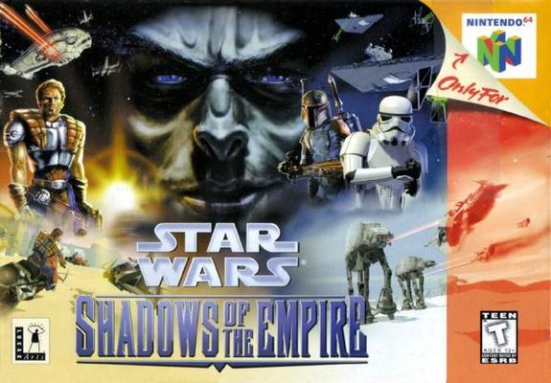 Genre: Action
Year: 1996
Developed by: LucasArts
Published by: Nintendo
Platforms: N64, PC
#380
Feeling Like: I’ve got a bad feeling about this…

My list is almost solely based on emotional impact and how much I liked it at the time. I can’t justify why I’ve placed it ahead of Metroid, Terranigma or Bucky O’Hare but I’ll tell you this; all three of those games are vastly superior. They’ve aged better, they’re more fun to play, there’s no wonky camera to deal with, the 2-dimensional graphics look far more appealing and I’d rather play any of them than Star Wars: Shadows of the Empire. So, what gives?

It’s because, at the time, I was so obsessed with Star Wars and the N64 that the rush I got from playing it exceeded anything previously found on games 381 and lower.

I was on a school exchange in England when I was 12 years old. I had family over there, so dad came with me to see some sights and soak in some of our ancestral heritage. I specifically remember going up to the top floor of Harrod’s in the middle of London and seeing Shadows of the Empire for the first time. The kiosk was surrounded by onlookers and gawkers. I heard Star Wars vernacular being used. It was a relief to see our Commonwealth friends had as big a fondness for video games as I did. Since we only had seen the N64 at our richest friend’s houses, nobody had one yet and standing in line for 43 minutes seemed like a proper investment of time. I was entranced; every blaster sound effect, every screech of a TIE fighter, every song I heard was straight out of the movies. This was as close to playing the movies as it came and it was utterly thrilling.

You play as Dash Rendar, who I thought was the coolest thing next to Han Solo, but many fans apparently revile as nothing but a cheap Han Solo knockoff. It didn’t bother me; the fact that Shadows of the Empire took place between the Empire Strikes Back and Return of the Jedi meant I got to see relevant cutscenes with all my favorite Star Wars heroes. Sure, it didn’t have the animations that the PC version did, but I didn’t even know that version existed until just a few moments ago, so what did young Henry care?

The vehicle sections rocked. Anytime you were in a T-47 Airspeeder, or a ridiculously quick desert hoverbike, or the Outrider on the final level, the game came alive. Momentum, velocity and firing your lasers was right on the cusp of breaking technologies (for consoles, PCs had this years ago with TIE Fighter) and it was impossible to resist replaying the initial level of Hoth. Activating your ropes and taking down an AT-AT Walker, while you glimpse your allies desperately trying to survive against the Imperial attack as you navigate three tight circles, is incredibly satisfying.

If you weren’t on a vehicle, however, things got a little hairy. Controlling Dash was loose, to say the least. Many of the levels required you to navigate tricky jumps and perilous ledges, all the while trying to maintain a camera that didn’t seem all that interested in following you. There’s no Gilbert Taylor at the helm here.

Stages were unforgiving in their length and challenge. Dying on the boss meant straight back to the beginning. Ammunition for special weapons, the only ones worth using, was nowhere to be found. Masochists attempted to find the hidden”Challenge Points”, while I was just trying to steer Dash with his jetpack. It was all so new, so we forgave the shortcomings. It was all so Star Wars, so we continued to forgive the shortcomings.

Thus is the curse of being a fanboy. It’s insultingly easy to pull the wool over my eyes, particularly when I didn’t have an internet to tell me the game was no good. I still look back fondly on the ship sections, but cringe when I remember the endless canyon level and trying desperately to defeat Boba Fett to avoid having to trudge all the way back again.

Still, a ranking is a ranking. It’s too late to go back now. If this wasn’t a licensed game, if it didn’t have the classic Star Wars dressing, if I ranked the games properly on merit instead of what series it belongs to, it would be so much lower.