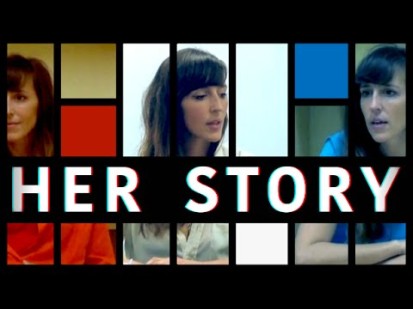 Her Story is the only game on the 500 that I would legitimately recommend to my mother. While that statement may drive away hardcore gamers in droves, it shouldn’t. It’s one of the most unique experiences I’ve had and goes all in for narrative and story driven gameplay. It’s also very difficult to review/recommend/reminisce without giving away spoilers, so I’ll tread carefully.

Even discussing the protagonist might be a giveaway, so I’ll just say that you play as somebody who has logged onto a computer in the mid 1990s. A person named Simon has been murdered and it’s up to you to review video footage of hundreds of interviews to find out what really happened. The catch is that there’s no set list. You have to type in requests into the search bar and various video clips will pop up. Typing in broad keywords will result in more videos to be selected (five maximum), but how useful will they be? Not every clip will help you unravel the mystery, but you can’t afford to miss much. You’re able to tag the clips with your own notes, but you’d be foolish not to have a pen and paper ready. After all, there are 200 total videos and with the length of each varying from a few seconds to a few minutes, there’s a lot of information here.

I enjoyed it immensely. I felt like I’d just opened up my own detective shop and was already hard at work; a bright eyed gumshoe who thought he’d solved the mystery after watching 10 videos. After a visual jog down the rabbit hole, however, I realized how far I had to go and how clueless I really was. As soon as I’d nailed down a theory, another video threw my certainty into a blender as the case is filled with red herrings, surprising revelations and contradictory testimony.

I also appreciated how non linear the gameplay was. If it was just me watching videos in a row, that’s a Youtube playlist. But the fact that it’s essentially an interactive portion of an episode from Law and Order kept me going. The location of the interview, time and dates are available for each video so it’s up to you to piece it all together. I’m hesitant to call this a puzzle game, but I’m not sure what other genre defines it. This is the kind of game that should have been launched with the Panasonic 3DO.

The performance from Viva Seifert is compelling and the audio is accompanied by closed captioning, so I never felt the need to repeat a video unless there was a crucial detail I wanted to confirm. Over time, the game has more than a few emotional punches that I wasn’t expecting. Like when you find out more detail about who you are. Or when some seemingly mundane “action” occurs in the videos. Trust me, after digging for clues, even the slightest variation becomes unbelievably exciting.

Her Story isn’t for everybody. It’s more of an avant-garde experience than a traditional game, but the developer Sam Barlow has done a tremendous job here. In another world, Her Story would be much higher on the 500. It satisfies an itch I didn’t even know was there. It’s over in less than a few hours and it’s essentially a custom version of a google video search, but it totally engrossed me. This is the kind of game that will appeal to non-traditional gamers and that’s a feat to be commended.