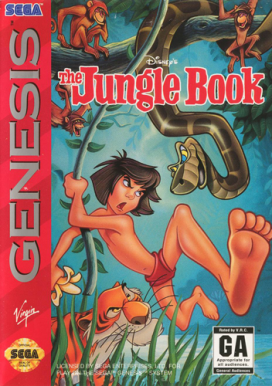 Continuing on the trend of Disney licensed 2-dimensional side-scrolling platformers, we have The Jungle Book. Fundamentally, it’s not as good as The Magical Quest Starring Mickey Mouse. Virgin’s animations always felt more advanced, but overdone. I swear, when Mowgli jumps, he makes about 10 different body movements while doing it. When I was jumping, it felt floating and spectacular; fun, but not with the same measure of control that Capcom had.

The levels are pretty repetitive. There’s only so many color palette swaps you can do, especially in 1993. Mowgli certainly didn’t have as many powers as Mickey did; throwing bananas is hardly on par with being a turban wearing magician. In addition, it’s short. REALLY short. Even shorter than The Magical Quest. One could be dismayed at the length, but when you’re ten years old, renting and beating a game in the same day gave us some sense of progression.

So you’re probably wondering why The Jungle Book is in the illustrious #472 spot instead of #473? Simple. Much like Snowboard Kids it’s all about the soundtrack. Bare Necessities and I Wanna Be Like You are two of my all time favorite Disney songs. Sure, they’re cheesy and filtered through the Genesis’ audio hardware makes them sound like they’re being played against an old, run down circus game, but it still sounded great. Catchy as hell. Even now I can remember my cousin’s TV, perched far too high on her mom’s dresser, blaring out the ballad of Baloo as I jumped and climbed Mowgli through the jungle’s dangers.

Aside from superior audio, that’s about all The Jungle Book has on the games below, aside from a very powerful nostalgic connection to the animated movie. It still holds up for the most part, but the crowning jewel is the voice of Shere Khan, George Sanders. Unlike Idris Elba’s Khan, which to me came off a bit snarly and desperate, the 1967 version of Shere Khan was supremely confident, snobby, dismissive and had an aura of power unmatched in most cartoon villains. He was suave when most anthropomorphic antagonists would be over the top. I hold great reverence for that character, so The Jungle Book gets the nod.

Acceptable mechanics are here, too. Throwing projectiles is responsive and can be done in all directions (bananas, at least). The compass is very useful in locating gems, though I doubt you’ll need the benefits from the bonus levels they award you for collecting them. All you need is the Bare Necessities, the Simple Bare Necessities…