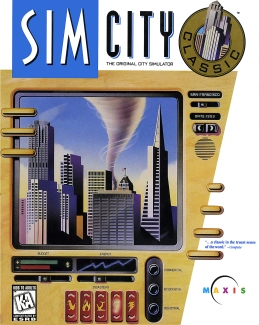 Genre: City building, Simulation
Year: 1989
Developed by: Maxis
Published by: Maxis
Platforms: Too many to list here (Windows)
#487
Feeling Like: I should never be in charge of anything bigger than a closet

As I stare out of my window at 32,000 feet over the American Midwest, I’m easily reminded of why I love city building games. It’s much harder to see chaos from this high up. Roads and hills become brush strokes in a painting. Everything is simple and has a place in the tableau. Not only can I see further, I see things as I’ve never before.

Some categories get the benefit of the doubt from me. Role Playing Games, naturally. Tower defense, surely. City building, above all, absolutely. I don’t care what the mechanics are, I don’t care how advanced or dated the graphics are. The soundtrack is almost irrelevant, though SimCity games often have outstanding ones. All I want to do is plan, execute and watch my little citizens go to work as I gaze from above. The eye in the sky, always watching.

Yes, SimCity is easily the most archaic in the series, but introduced so many fundamental elements to a good city building game that it is rightfully claimed as the initial innovator in the genre. It was one of the first mainstream examples of how computers games could be more than shooting, or testing your reaction speed. Sometimes gamers like to take their time and imagine. And we’ve all lived in a city at some point, or something like it, so who can’t make the connection? Who hasn’t wanted to move the corner store closer to them, upgrade the bridge so ships can get through and expand the rolling hills because parking lots are an ugly necessity only in life?

I mean sure, the screenshot makes the game look more like one of those kick ass mats your friend had that seemingly covered the entire rumpus room instead of a piece of interactivity. Even though that mat was as three dimensional as the game itself, it hardly mattered. Roads were not only orderly constructs, but a pathway into the unknown. Look at all this land. I’ll never own this much land in my lifetime and I can put anything there. Although, I probably should put a fire department since my little Sims seem incapable of doing anything but getting stuck in traffic and burning their houses down on a nightly basis.

It’s a completion’s nightmare because there isn’t ever really an end and it’s impossible to do everything. Some Sim games have soft endings where you’re congratulated with some kind of congratulation screen, but it’s not worth getting. It’s worth daydreaming about your southern coastline and whether you think a stadium would look good there. Or planning your finances so you can splurge on a new power plant. The true testament of SimCity’s habit forming, addiction thrusting appeal is in its revolutionary game play, sandbox potential and hilarious/harmless disasters to wreak havoc upon your inhabitants.
Previous 488 Mutant League Hockey                                                                    Next 486 Kid Icarus