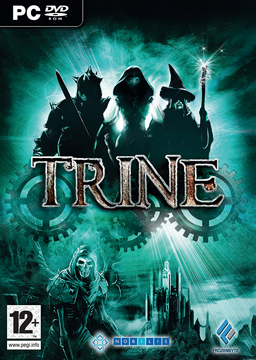 Two things come to mind when I think about Trine. The first is our good friend, David O. Somehow the funniest, easiest guy in the world to get along with becomes funnier and easier to get along with when we’re playing video games together. The second is a near perfect blend of linear level design and totally open gameplay.

Sounds weird, right? Well, in the hands of a genius, the Wizard character can completely break the game’s platforming and secrets wide open. In the hands of somebody like me, it’s less Gandalf the Grey and more Usidore the Blue.

The Wii U is the perfect device for Trine. David, Kyla and I were delighted to hear about a platformer/puzzle that contained a three player co-op campaign option, even more so when we could play it within the hour thanks to digital download. We’d formed quite a trio; we’ll get to our escapades in Dungeon Defenders down the road, but trust me when I say that a certain bond is formed when faced with a level you can’t beat, despite 20 hours of trying.

Back to the hardware. I insisted that I play Amadeus the Wizard. That means, by default, I had the Wii U tablet. Those who grew up as the older brother, or owning the console, meant that you got the best/nicest/1st controller. Why should things change? I haven’t matured all that much since I was 12, I don’t expect my gaming habits to either.

The Knight attacks, the Rogue can use her rope thingy or something, but the Wizard can create boxes and platforms out of thin air by simply drawing them on the gamepad. I did this often, with such irritating frequency that I often had a “box time out” where I was forbidden by Dave and Kyla to STOP DRAWING BOXES, OH MY GOD, THAT’S NOT GOING TO HELP US GET ACROSS THIS CANYON.

Another thing to note about Trine. It looks incredible.

Why too incredible? We often became so enamored with the gorgeous backgrounds, the elephant skeletons, the bloom lighting effects or the fantastical fairy tale landscape that we’d often have a hard time locating where we were on the screen. Now, the camera doesn’t zoom out all that far, so you’d think it would be an issue.

But let’s try this – see the above screenshot? Can YOU spot a Wizard, a Rogue and a LARGE Knight clearly at first glance?

Neither could we. Often.

Maybe the outlines of the characters needed to be sharper, I’m not sure. I can say with great certainty that trying to get the three of us to cross obstacles and enemies all intact, using a very diverse set of abilities, was akin to herding three very independent cats who seem to be magnetized to dying (good thing we had more than nine lives!) It reminds me of the three of us trying to agree upon what to get at the grocery store. Sure, we all have good ideas. But time’s a wastin’ and I’m getting hungry.

Playing solo, as usual with games, offered a fraction of the satisfaction. Switching between three characters with a simple press of a button was easy, but trying to frantically switch to the right character while under duress from bats and skeletons and other mythical creatures was anything but.

No, the highlight was drawing as many Rube Goldberg like structures with my stylus so Kyla and Dave could…well I won’t say walk, more like hop eight or nine times because my kindergarten platforms would collapse at the first sign of weight. I wouldn’t have it any other way, although my intrepid partners probably would.