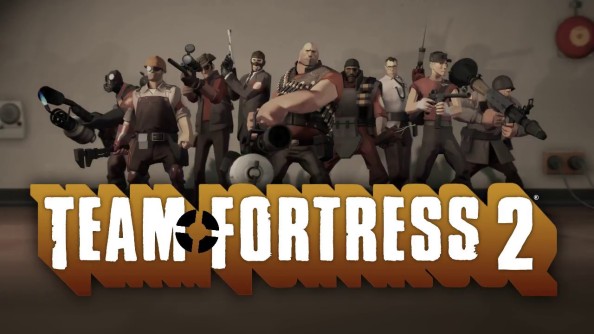 I distinctly remember reading a PC Gamer at Dobbo’s house a long time ago. There was a screenshot of Team Fortress 2, a massively anticipated, online multiplayer team shooter.

We were all still stoked on it, of course. You have to remember, back in the day Valve could do no wrong. Half-Life assured gamers everywhere that this little company out of the Pacific Northwest was LEAGUES ahead of anybody else in terms of interactive storytelling. Any morsel, or scrap of information, or rumor was worth at least 5-10 pages in every gaming magazine worth its salt. Most players just assumed it would be incredible.

Then we waited…a long, long time. It first was announced at e3 in 1999, only to be released eight years later under a totally different look. Gone was the modern war aesthetic, instead it was replaced with a cartoonish, over the top style that has aged miraculously well. Eyebrows may have been raised, but Valve, as usual, made the right call.

Now that I look back on it, I only played a few hours of Team Fortress 2, and I’m in the minority. Those that played it will brag/admit thousands of hours of play, as it’s just that addictive. It really did spawn the multiplayer class shooter, long before we were graced with the likes of Overwatch, or Plants vs. Zombies: Garden Warfare. Part of the genius was that no character was overpowered; you could make any team combination of the 9 different classes work, and the variety ensured there was at least one character that appealed to everybody.

It’s got such a great sense of humor, with each character having unique dances and hilarious one-liners – that we may never see such a combination again.

So, Team Fortress 2 doesn’t have the most hours played on my list. I never played it with friends. I didn’t really even give it a fair chance. So why did it beat out 143 other games?

Well, as somebody who works in the Free-to-Play Video Game Industry, I have to give credit; it may be the single most influential game in recent history.

That’s a lofty title to bestow, I’ll do my best to explain why.

When it was released, it was made available on Steam, the digital platform for nearly all PC gaming for the last 12 years. This was a largely unknown type of distribution at the time, with many players lamenting the fact that they don’t officially “own” the games, or wouldn’t have a physical copy, or not trusting Valve to keep the servers going. At first, it wasn’t a massive success.

That changed soon, however, when the eager population realized how convenient the system was. How discounts were far better than anything they could find in stores. How games updated automatically. How the need for a suitcase of CDs for installing was a thing of the past. How internet speed improvements only made the service better. Team Fortress 2 was the first killer app for Steam, and it worked – despite gamers being able to purchase a physical copy through the Orange Box, downloads soon rocketed into the millions.

Another notch in this titan’s belt – the free to play model, introduced in 2011. We’d seen this type of pricing structure in various forms as demos for games were available on discs, freeware titles were given out in various magazines, and online flash games were at an all-time high popularity wise. But a massive developer offering a game for free, monetized by…hats?

This choice turned some Valve employees into exceedingly wealthy people. The concept of buying digital fashion items was laughed at by many at the time, but nobody would dare anymore. By charging tiny fees for hats, coats and costumes, Valve put the pricing in charge of the consumer. And those that loved the game, paid a LOT.

Team Fortress’ 2 influence reigns even today. There are still roughly 50,000 active players, but one look at Dota 2, League of Legends, and Fortnite and you can see the indescribable popularity that Valve initially tapped into. Free to play is here to stay.

So, there you have it. My job in its current form may not even exist had Valve not taken a huge risk and gambled with Steam, the Free to Play Model and the massive shift in development style with Team Fortress 2. It’s brilliant. Updates to the game don’t change the meta, so no character is “overpowered” and players don’t have to fear about their class getting swept aside. The music energizes you, the different modes satiate you, and its history should impress you. What a game!