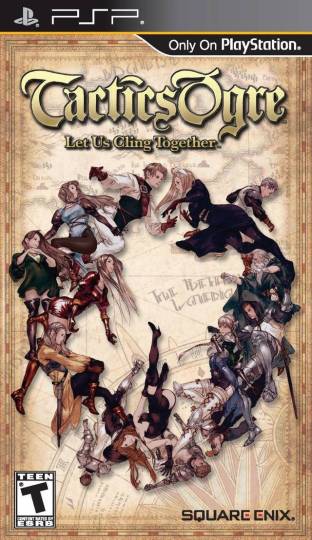 I haven’t touched on Tactical RPGs much so far on the 500, and they’ll be few and far between. I’m not patient enough; these styles of games usually mean a huge amount of preparation in menus, equipping a large number of allies with equipment, skills and items. So far, so good. They also inevitably include a battle that can take anywhere from 30 minutes to a few hours, with very little room for error. That’s not as appealing to a guy who can’t seem to grasp every nuance of combat, or a guy who lacks the discipline to wait longer than a few seconds for anything to happen.

Regardless, they’re inescapably endearing. The genre demands a lot of its players, but also typically rewards them with sweeping, epic stories featuring a cast of dozens, grand soundtracks and endless customization of their armies. If you’re unfamiliar, unwilling to learn, or rushed for time, this is not for you.

Since I’m not quite unfamiliar, mostly willing to learn and only sometimes am rushed for time, I dove into Tactics Ogre: Let Us Cling Together  – not knowing what the hell I was getting into. I still don’t. It’s only one of two PSP games I ended up beating, thus finally broadcasting that I’m not a handheld guy. I’m just not. I’d rather play on powerful hardware and a big screen. While it does lend itself well to taking it on the go, I found myself squinting a lot and wished I didn’t have to manually scroll through so many pages of lore and backstory. I couldn’t help but think how amazing the map would look on a big screen, or if I could see the entire battle map on a 55 inch instead of a 4.3 inch.

I was beyond confused at certain times. Despite a forgiving system that enables you to read summaries of events, I found that many of the personalities started to blend together. Characters would mention a specific rogue or bandit I defeated fifteen hours ago and I’d have zero idea who they were talking about. It doesn’t help that there is a limited amount of models, and I often relied on the detailed heads that would show up during conversations to sort out who was who.

This is hardly due to bad game design; TO: LUCT is spectacular. Big events feel weighty, the writing is solid, the political intrigue is devoid of cliches and the art style is endlessly charming. It’s not as good as Final Fantasy Tactics, but it’s dangerously close.

The sheer amount of customization and freedom is staggering. While I told myself to keep it simple, the allure of a powerful new class was too much to pass up. Since it’s the class itself that levels up, not the character, the game is forgiving if you happen to lose a companion on the battlefield.

That doesn’t make it any less difficult. At the equipment screen, there’s about forty points of data for each individual unit, including name, class, equipment, skills and movement capabilities to name a few. Once my army got up to 15 people, preparation for each confrontation felt like a level in itself; who do I take on the next mission? Do I give my weakest healer a try? Do I go for two, or three archers? Do I have the proper amount of magic damage?

But therein also lies the great appeal. The ability to personalize each name instantly adds a personal connection. Some characters will inevitably rise above the others, always being the first to be equipped with new loot, while others of the same class will have to do with hand me downs. I was no stranger to playing favorites – Canopus the Vartan, a flying hawkman archer, was in my party every single second if I could help it.

This product is so polished, it’s easy to forget that it’s a port of a much older game. The update allows you to go back to pivotal story moments and change them if you don’t like how the result turned out. While fighting, you’re able to turn the clock back up to fifty turns. It’s not as if they don’t give you the proper tools to secure victory, they just recommend you pass a few tests and listen to a lecture before you get your feet wet.

Tactics Ogre: Let Us Cling Together evokes such a see-saw of emotions, and I think that’s apt based on this style of game. A victory after a long encounter will feel incredible, while a devastating loss will leave you grieving at how you spent 41 minutes not gaining any traction. The variety of fighting is marvelous, not only in skills and moves, but also in the company you keep. Gryphons, Golems, Dragons and other mythical creatures can be tamed, along with archers, healers, mages, knights and several others you’ll come to recruit and rely on to get out of a tight spot.

Going downwards on the see-saw, it’s pathetically easy to miss stuff. Not just items, but full characters, towns and story beats. I was maligned when I looked up strategies on Youtube for the final (impossible) boss fight, only to discover everybody’s armies were way cooler than mine. This is the type of game that would lend itself well to playing with a guide.

True to the nature of Tactical RPGs, this is one of the longest entires I’ve had on the 500 so far. There’s just too much to talk about. I haven’t even told you about how thrilling it is to finally construct a proper defense against an enemy attack, or how you can use all manners of the environment to your advantage. Or how good it feels changing a longtime friend’s class into something totally new and unexpected. How adjusting your strategy after a loss and turning it into a win can feel monumentally satisfying. How the soundtrack and weather greatly puncutate clandestine conversations, how inner betrayals saddened me beyond what I’d expected, how ensuring that each unit had a fair amount of experience felt like raising a small, violent family. How I had no choice but to pursue until the end credits, because the thought of not finding out the conclusion wasn’t acceptable. Despite the ridiculous name, despite being frustrated at the steep learning curve, I wasn’t able to stop. If they ever bring back the series to modern consoles, I’ll be the first in line.