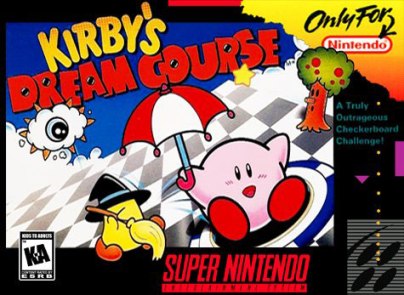 I didn’t think it would be so soon, but I’ve already arrived at a game where I’m questioning my sanity at its placement on the 500. To bestow Kirby’s Dream Course a ranking of 458 is sacrilegious. This is a wonderful title that is full of Kirby’s carefree fun, a satisfying learning curve and a replay value that goes beyond just beating the game. It got hundreds of thousands of Super Nintendo owners interested in golf, who are still not interested in golf. Nintendo and Hal Laboratory’s creativity is in full effect here. The only question is, what the hell am I thinking about putting it amongst The Dregs?

I owe it to my own stupidity. I had plenty of opportunities to rent or receive it as a gift, but I chose neither. It wasn’t until Fuzzy and Weatherbee showed me the way, in the cold Bigelow basement during my first year of university, that I realized how foolish I’d been. Kirby has a way of endearing a lot of people. I picked him as my main Smash Brothers character due to my history; Kirby’s Dream Land (coming up next) is the first Game Boy game I beat fully, and frequently. He wasn’t even pink then, it was all shades of greenish gray but I loved the little guy. Hilarious physical comedy, pratfalls, toughness and a great sense of do-good led me to instantly like him, and nearly anything he was associated with. That being said, my shame list of Kirby games not played is as long as my Christmas shopping to-do list this year.

The basics; you’re Kirby and a golf ball. The worlds are set up as mini golf-ish courses where the ultimate goal is to destroy enemies by inputting top spin, back spin, power, power-ups and finally putting the little pink ball into the hole. Like in golf, you’re trying to do it in as few attempts as possible. Also like golf, it can lead to a heart attack and a flurry of curses that would make a biker gang collectively blush.

So much goes on here. You have to use the sides of the course as a bumper. You have to time your abilities correctly. You have to put spin on Kirby. Physics dictate caution when you’re shooting up, or down hill. The always appreciated isometric perspective. Two player mode. Medals are given for hole-in-ones. The classic Kirby sprites and animations are bigger and better than ever. Enemy powers must be used at exactly the right moment to keep Kirby’s momentum going and get him ever closer to the last enemy. Replay value is greatly encouraged, as later worlds demand the utmost precision and practice to gain mastery. Watching YouTube replays of perfect runs is akin to watching Tiger Woods in his prime; impossible, mouth dropping beauty. A perfect display of skill and practice.

How in the hell we haven’t seen another Kirby’s Dream Course is beyond me. Add this idea to the list of games that could have CRUSHED on the Wii U, or hell, even the Wii. Did they tap the creative well? Was HAL apologetic, and couldn’t open the doors for a sequel? I’ll never know, but I’ll never give up hope. Here’s to my future wisdom upon playing Kirby’s Dream Course 2 on day one.