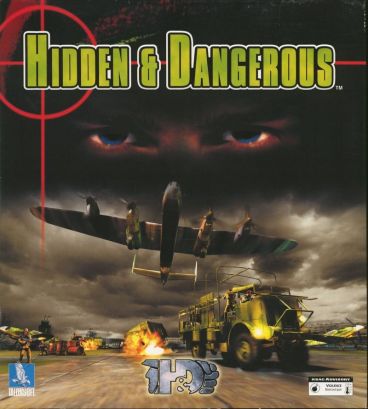 Having a PC capable of running a first person shooter that was more graphically intensive than Doom took me a long time to get used to.  When Papa Skey banned us from the living room in the preceding weeks leading up to Christmas, I feigned outrage; I could only hope that our present was a real computer. An upgrade from the 486 I’d  appreciated for the previous seven years. It was. A good one. I could even play Starcraft.

Hidden and Dangerous was one of my initial frays into the online world of cooperative warring. The Commodore said we could play multiplayer through the campaign. Ray had bought a copy too, nearing us a full squadron. Well that sounds easy enough, check. Commodore also mentioned that it was a game that requires superb verbal communication. Check. This should be great! But, above all, it required our full attention to tactics, guile, stealth and staying…well, hidden.

There were also some mentions on the forums about a few bugs here and there, so we’d be fighting the Nazis AND lines of code.

At least we had our choice of combatants. I often went with, by jove, the least stealthy of them all – Private George Aldridge. He was injured during the Dunkirk evacuation (can’t wait to see him in Christopher Nolan’s upcoming movie!) but refused a cushy office job to get back out into the field.  He has no distinctions, other than having the unfortunate fate of being controlled by a Canadian teenager 53 years into the future.

You could only carry a certain amount of ammunition, so deciding who would carry what weapon prior to load out was critical. It also meant that you had to stick to the plan; you couldn’t just all of a sudden decide you wanted to go in guns ablazing if you had the only sniper rifle. Which I wanted to do every single second of my existence, so I was usually relegated to “guy who goes through the door and dies first” role. I can’t remember if I wore a red shirt.

At least I was more competent than the AI. The orders of “follow me” or “stay put” are the extent of their understand of basic combat ability. But getting our lone automated counterpart to behave was the least of our problems. The German oppressors would be, you’d think. In theory.

Speaking of “In Theory”, you remember that Star Trek: The Next Generation episode where one of the crew gets embedded into the floor due to a space anomaly caused by the ship’s proximity to the Mar Oscura Nebula?

You’re looking at enemy number one. The ground itself might as well have been covered in Mecha Hitlers for how perilous it was. I can’t tell you how many times we’d lay low to avoid detection, only to avoid the laws of physics and fall through the ground and die. Or go through a wall. Or just suddenly not having a weapon that we loaded out with. You name it, we had it.

Since the game was challenging enough without these quirks, we never finished the campaign. We also never stopped having fun. Raymond and I frequently blamed the bugs for our sub-par play, and the poor Commodore was stuck with one non-intelligent artificial intelligent, two bumbling subordinates who were more concerned with hilarious situations than rescuing hostages, and dozens of instances of unavoidable acts of digital god, none of which were beneficial to the mission.

I’m convinced that the title of the game referred to the inexplicable, unexpected and sudden sinking into the floor. Turns out we weren’t the hidden threat after all. It’s too bad, because when we stumbled upon a bug free experience, it felt magical. Putting our game faces on, neutralizing enemies in a strategic way, planning our attacks and beating levels was glorious fun. It felt very much like an introduction to something incredible, and a taste for what’s to come. For better and for worse.