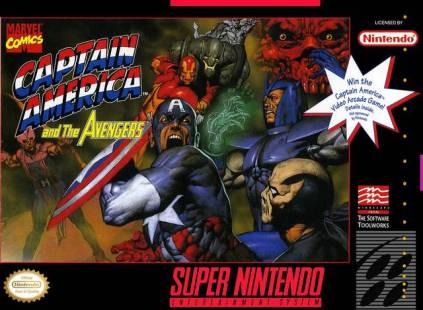 Okay, so technically I didn’t lie you to. Captain America and the rest of the Marvel roster weren’t owned by Disney in the early 90s and it’s not a platformer. But yes, another licensed game (that’s four in a row) and the next one won’t be a Disney property, a platformer or something that you’ve heard of before.

I was sold. This is what I wanted. I didn’t have the energy to pretend to care about winning a whistle or Pez dispenser. I wanted to beat the living hell out of enemies with Cap’s shield, Iron Man’s blasts, Hawkeye’s arrows and Vision’s vision. The Arcade experience was perfect for a bunch of sugared up tykes who wanted nothing more than to jump, thwack, sprawk, boom and WABOOM! enemies into oblivion.

I ended up playing it on the Arcade, Super Nintendo and Genesis. Normally it’s personal heresy to claim that Sega trumped Nintendo in anyway, but here it’s true. The Super Nintendo version really sucks; different developers , so that stands to reason, but not to this degree. The controls were worse, it was harder and Vision shot his lasers out of his crotch, not his head. Funny then, funnier now. The Genesis version was superior in every way.

I refused to play as Hawkeye and Vision. I had no idea who they were. I barely understood who Iron Man was. As nerdy as my upbringing was, I didn’t read comics. No venue presented itself, other than hearing rumblings of characters from other kids at school. If a student managed to smuggle in a comic book for us to read, it was treated with great reverence. But Captain America was omnipresent. Maybe it was his weapon, maybe it was his easy to remember name, or his iconic outfit, I’ll never know. But Cap was my jam.

So I would spend the entire time throwing his shield and reveling in the fact that it damage the enemy twice if you aimed correct; once on the way there and once on the way back. There’s an underwater section (with the easiest boss ever), a space section, bosses, all that good stuff. It even did the crappy writing and giant announcer voice before X-Men did. It’s all here. Avengers assemble!