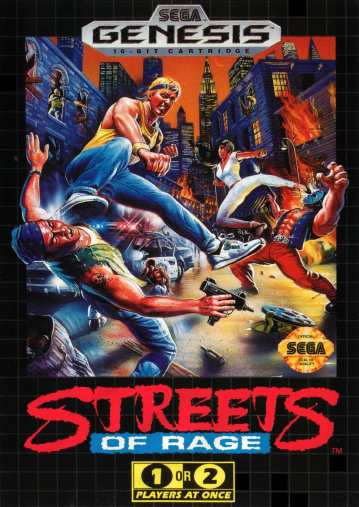 Out of all the elements that make up classic video games, soundtracks are most likely to stand the test of time. Controls, graphics, presentation, story and writing have all seen monumental improvements and it’s rare to see a modern game not do at least three or four of those variables significantly better than 99% of the games I enjoyed as a child.

But I’m not convinced the music has the same level of default improvement. Oh sure, the hardware is vastly superior, but when it comes to melodies, the past can still hold a distinct advantage. Case in point, Streets of Rage.

It’s still considered to have one of the best soundtracks ever, a masterpiece created by the legendary composer Yuzo Koshiro. He wrote his own software for the Genesis, and used both audio chips in the console to create a brilliant score, heavily influenced by techno, house, electronic and dance music. It is impossible not to find yourself tapping your foot to Fighting in the Street. Or marveling at the foreboding introduction of The Street of Rage. Nearly every stage is accompanied with a weird, creepy, endearing tune that would be at home in any overcrowded rave, or Japanese dance club. You might think I’m crazy, but the physical albums go for insane prices in online auctions, so I’m not alone.

So what else does Streets of Rage have to offer, other than 17 examples of musical genius? Quite a bit, thankfully.

It’s your standard beat-em-up fare, but with tighter controls than something like Golden Axe: Revenge of Death Adder.  The challenge level is very fair, with plenty of turkeys and apples to keep your health up. You’re able to use your partner as a launch pad for co-operative attacks, as well as being able to grapple enemies for various judo/wrestling style throws and headlocks. Punching your enemies in rapid succession feels fantastic and the muffled screams of fallen punks compels you to do it over, and over, and over.

There’s enough variety in the enemies and bosses to ensure repetition doesn’t creep in. It’s not an overly long game, unless you accept the villain’s proposal to join your squad and get sent back two levels. This anti-warp zone pissed me off to no end; what the hell was I thinking? You also better have a competent partner; friendly fire is a constant threat, as much as mo-hawked, knife-wielding thugs.

It’s certainly slower compared to the sequels, but not so laggy that you won’t be able to compete. In fact, the fewer frames per second just add to the triumph of head locking an enemy, kneeing them a few times in the kidney, gymnastics flipping over them and finishing them off with a perfect German suplex.

It’s hard to believe that the songs in the sequels were even better, but they were. All three games in the series were mainstay rentals for my cousin for very good reason – they could be beaten quickly, were co-operative, let us crush some skulls with lead pipes and if things got tight, call in the police artillery. I’m shocked that when online debates emerge about the most iconic themes in video game history, Streets of Rage isn’t mentioned with more frequency.  Beyond introducing me to synth and trance, it’s a hell of a fun classic that I’d pick up and enjoy any day.