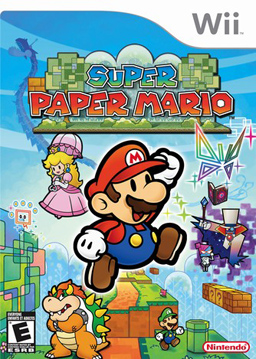 Genre: Action, Role-Playing
Year: 2007
Developed by: Intelligent Systems
Published by: Nintendo
Platforms: Wii
#492
Feeling Like: It’s Only a Paper Me!

Nine games in and we have our very first Mario title on the board! That didn’t take long, nor should it. The 500 list will contain 36 Mario games in total, ranging from the classic platformers to the wacky sports games to the role-playing versions and everything in between. Whatever life Miyamoto led was the right one; without him, we wouldn’t have gaming’s most iconic character ever. It boggles my mind how with each generation, Mario stars in yet another sublime example of video game mastery. Nintendo might have lost a step here and there, and Mario might not be more recognizable as Mickey Mouse anymore, but he’s only 35. In video game years, that’s an eternity.

Super Paper Mario is the fourth game in the Mario RPG series. This was easily the weakest and my least favorite of them, but it still shows a ton of charm and the premise shows why Nintendo continues to be a leader in…well, trying new things. Not all of them work, but by god, they try.

The key element here is pretty cool. By pushing the ‘A’ button, you swap Mario from a 2D to a 3D perspective. This is quite inventive and definitely spices up the traditional 2D Mario platforming fun. The levels a bit sparse though; like the developers made it so you could switch to 3D, but forgot to tell the head architect. Communication problems happen though, can’t complain too much about that.

What I CAN complain about is the heavy use of dialogue. Previous Paper Mario/Mario RPGs were not shy of text and exposition, but nobody in Super Paper Mario ever shuts up. The writing isn’t bad either, it just KEEPS. ON. GOING. Everybody has a grand monologue they just HAVE to get out while Mario politely listens and mashes ‘next.’ I think it’s probably the only time I was fed up with reading and eventually just stopped caring about what Count Bleck or Blumiere had to say. Which is too bad, since the villainous Bleck had some pretty funny lines.

They had some good meta humor too. I’m sure they adored poking fun at the internet with Francis, a chameleon computer nerd who is antisocial and relishes spreading his thoughts online and laments missing an episode of his favorite TV show. Did I mention he doesn’t have any offline friends?

Playing as Peach and Bowser mixes it up, but eventually I just wanted either a 2D Mario Platformer, or another Thousand Year Door/Super Mario RPG. Instead, I got a poor man’s hybrid of both. The pixel buddies are cute and fun to use, but they can’t save Super Paper Mario from being a great idea in concept and a muddled execution. There is something super satisfying about showing off after EVERY jump to earn more EXP, however. I’m always a fan of gusto!