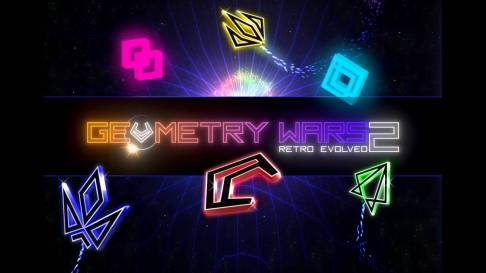 Once Geometry Wars: Retro Evolved 2 emerged, there really was no reason to go back and play the original. The sequel is superior in every way, with six modes, a more fleshed out multiplier system and a local co-operative mode. Despite these improvements, I can’t place it any higher and it’s for a really strange reason.

When Geometry Wars: Retro Evolved was released, it was the first of many downloadable titles that showed mainstream gaming audiences that not everything new had to be triple A productions with massive budgets. Oh they’d be updated all right, in full HD – still new to a lot of consumers, remember. But it tapped into an urge that was already close to the surface for many. Old school, vintage design.

Millions grew up with stuff that isn’t up to modern snuff, but the concepts of of dodging and shooting in an easy to navigate two dimensional space were endearing in 2005, in 2008 and will be forever until the fundamentals of how humans recognize and enjoy patterns change. That’s not going to happen in our lifetime.

Three years is a long time to wait to capitalize on nostalgia that is slowly becoming nostalgia itself. By the time Retro Evolved 2 came along, it was already surpassed by other titles inspired by Retro Evolved, such as Super Stardust HD, which you’ll see a bit higher on the 500.

As a result, Retro Evolved 2 didn’t have the same impact as the original, despite the great additions. Instead of two modes, there are now six. I won’t bother to list them all, just know that they will challenge your reflexes, heighten your senses and trigger a lot of endorphins with manic colors that drive across the screen at two hundred miles per hour.

The only mode that I dug my heels into was Pacifism. And what a mode it is.

I love how it all starts with an unnecessarily explosion of black and purple hues. It’s saying “HERE I AM, GAME. I’M READY TO BE A PACIFIST AND MURDER YOU ALL.”

It’s tricky, and brilliant. You control your little spaceship, trying to avoid the mass swirls of blue enemies, but you’re not able to fire this time. Hence, Pacifism. What you CAN do, is break through tiny gates that will immediately expunge the mass hordes that are rudely following you. The trick is to lure as many of the enemies into the gate, before breaching it and scoring the best you can. The catch is that the more you lure in, the more likely you are to fail. You only have one life, and no power ups. No room for error.

It’s entrancing, more so than any other mode. It quickly becomes a hallway of hell simulator, where any deviation in any direction will mean instant death. Keeping track of the emergence of your gates, your ship AND the increasingly growing swarm of enemies is an exercise in mental juggling that will test your limits and dexterity like few games have before. Dancing through emerging and closing paths is a true delight. Trying to beat your own high score is personal development quantified and it’s impossible to resist.

Geometry Wars: Retro Evolved 2 is a fantastic experience, and a true successor worthy of your time. While it missed out on its opportunity to make a bigger splash by not including online co-operative play, it still retains the nostalgic appeal that would entice many gamers, both new and old.